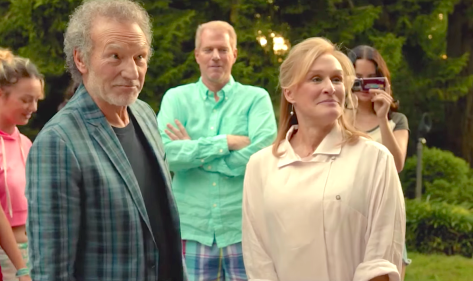 The Wilde Wedding, the Damian Harris written and directed movie about a retired actress who remarries for the fourth time had me feeling a tad disinterested immediately. Reason being, I found that I didn’t connect with the narrator at the beginning. I also felt there were too many characters, none of whom proved particularly interesting.

For me, this film just plodded along and I continued watching in hopes that things would improve. Especially considering the main cast  – John Malkovich, Patrick Stewart and Glenn Close.

I’m glad to say that things did get interesting and more dramatic somewhere past the halfway point. And I certainly didn’t anticipate the way it ended. However,  is it all enough for The Wilde Wedding to be a movie worth recommending? Not really. In my humble opinion,  It’s Complicated (2009) is more fun.

The thing that stood out most for me overall about this movie actually has nothing to do with the story, but rather the truth about one of the actors. I’m speaking of Australian actor Yael Stone, a.k.a. Lorna Morello from Orange Is The New Black. The lady is a wonderful actor especially in Orange Is The New Black and she’s clearly gifted with accents, for in this movie her character is very convincingly British.