UglyDolls, an animated movie about ‘ugly dolls’ that confront what it means to be different and struggle with a desire to be loved is a film I wanted to enjoy more than I actually did.

Starring Nick Jonas, Emma Roberts, Janelle Monáe, and Pitbull, the message about being ourselves and accepting ourselves regardless of perceived imperfections is delivered through a story that unfortunately didn’t succeed at keeping my attention. For that I blame the overall execution, including the pace and rhythm.

Looking on the bright side however, (no pun intended), there’s the colours and cuteness to enjoy. Except that unfortunately, colours and cuteness don’t equal to a worthy movie experience. Luckily for me, there are two or three songs I did like even though I think the opening track felt quite forced.

Watch UglyDolls only if if you really must. Otherwise, watch Zootopia (2016) instead. It’s loosely similar but so very good.

From director and co-writer Kasi Lemmons, Harriet is a new historical drama based on the biography of iconic freedom fighter Harriet Tubman.

Starring Cynthia Erivo as Tubman, Janelle Monáe and Joe Alwyn, the story focuses on Tubman’s escape from slavery and subsequent missions to free dozens of slaves through the Underground Railroad…

Based on this trailer, I can tell I’m going to appreciate the dialogue, inspiring heroism and love. I can’t wait to see Erivo deliver what looks like an awards worthy performance.

The UglyDolls confront what it means to be different, struggle with a desire to be loved…

I’m in for the fun, smarts and expected usefulness.

In Welcome To Marwen, Steve Carell plays the victim of a brutal attack, one who finds a unique therapeutic outlet to help him through his recovery.

I’m in for all the things that make this movie special, including Carell’s likely notable performance and all the hardwork that made the dolls / figures possible. I’m also looking forward to finding out how Carell’s character’s coping method is characterised psychologically.

There are a number of reasons to like 2017 Best Picture Oscar winner Moonlight. The beautiful cinematography, faultless performances and a timely telling of a very important story are just three of them.

Thanks to Barry Jenkins’ very personal movie, I now know of Mahershala Ali, a very skilled actor whose Moonlight character Juan isn’t even in the movie throughout but there’s no forgetting him; if only for all that Ali was able to expertly convey, especially through his eyes.

Moonlight is a coming of age story about the childhood, adolescence and burgeoning adulthood of a young, African-American gay man growing up in a rough neighbourhood in Miami. It’s a film that reminded me of the very important and often pivotal role that the kindness of a stranger / strangers can have in our lives.

Watch it because it’s a story beautifully told and you too may find yourself remembering the perfect strangers that may have helped you become all that you’re grateful to be. 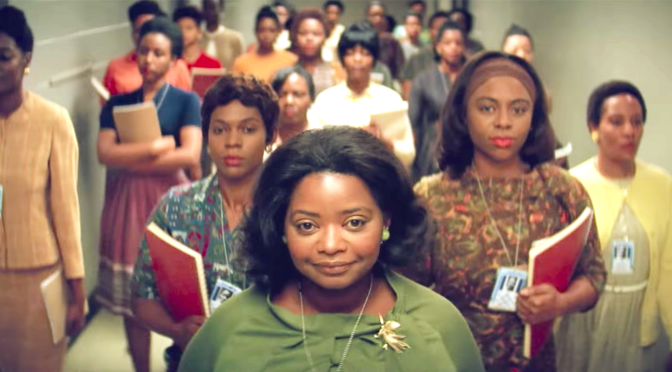 Hidden Figures, the movie about the three African American women whose mathematical contributions led to NASA’s first successful space missions is a film that did two important things for me. First it gave myself and many others a long overdue history lesson and second, it reminded me that that even though there’s still a considerable way to go, humanity really has come quite the distance in terms of equality and civil rights.

Seeing the challenges faced by the film’s main characters, the ways they dealt with the obstacles they encountered is really a great and empowering thing for anyone to witness. I particularly adore the sisterhood, strength, determination and good humour between them. By them I of course mean  Katherine Johnson, Dorothy Vaughan and Mary Jackson. I see these ladies as the kind of women with personal attributes that many would  probably want for the women and young girls in their life. And I’m not even talking about the mathematical genius.

Starring Taraji P. Henson, Octavia Spencer and Janelle Monae, there really is no faulting any of the performances in Hidden Figures. Director Theodore Melfi’s movie is a good example of what a well-put-together film can look like. Watch it because it’s thoroughly deserving of all its success. It’s also a beautiful celebration of truly great women and the people good and brave enough to do what was necessary to help them shine.

I just love when people achieve far more than other’s expectations of their abilities. Taraji P. Henson and Octavia are wonderful actresses so i can’t wait to see the inspiring story of mathematician Katherine Johnson on the big screen.