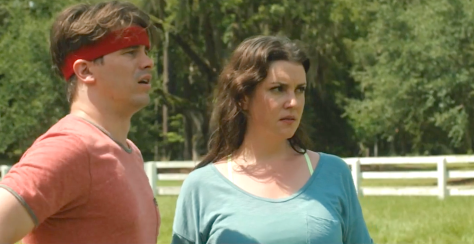 Starring  Cobie Smulders, Melanie Lynskey, Jason Ritter and Natasha Lyonne, The Intervention is  a good reminder for why having a professional moderator at family interventions is often a great idea.

The realistic way the movie captures family and sibling dynamics is a highlight. Another would be the funny scenes featuring Melanie Lynskey’s character, the ones where she made me laugh when comedy was far from her character’s intention – in a good way.

By the end of The Intervention, I did unfortunately fall out of love with the story, thanks to the seemingly rushed and forced way everything was concluded. Before then though, I had a reasonably good time.

Besides the film’s reliable cast as a reason for watching, Writer /actor and director Clea DuVall’s movie interested me because interventions intrigue me. I wanted to see how things would pan out for the characters.

I can confirm that there are definitely no current plans for an intervention in the near future on my side. Perhaps tune in if you have such plans. Or just  watch it for the knowledge and the cast, which also includes,  Alia Shawkat and Vincent Piazza.