The not so great news is that McCarthy’s latest Ben Falcone written/directed comedy/action/adventure Thunder Force falls firmly at the bottom of the latter category.

I honestly tried my very best to give Thunder Force, the story of estranged childhood best friends reuniting and ending up with superpowers a fair chance. It’s just unfortunate that the writing and pacing left me desperately wanting.

What makes it worse is that I wasn’t even tired when I hit play to watch a hopefully fun comedy in the afternoon. Yet, twenty minutes in, I awoke from a rather pleasant impromptu nap. A situation I feared might occur, especially after an unnecessarily long and unfunny bit of dialogue about salmon and a rock near the start of the movie. Nevertheless, I held on in desperate hope that things might turn around at any moment.

Things did not get better, not even a little bit. As such, after giving the movie one very last try, only to find myself waking up from my second nap in half an hour, I had to put an end to the madness.

Looking back, the most memorable parts of Thunder Force include the one brief moment involving rabbit-like teeth. And the other is the presence of Pom Klementieff as Laser.

Thunder Force is a film you watch, only if you absolutely must because you’re much better off revisiting the first three movies I mentioned at the start of this post.

Written/directed by Ben Falcone; Spencer and McCarthy play two estranged childhood best friends who reunite after one devises a treatment that ends up giving both of them super powers.

My fingers are crossed that Thunder Force is one of those McCarthy movies that I really enjoy; rather than the variety I have to stop watching within 15 minutes.

There must be hope because I find myself very amused by the vision of McCarthy’s Lydia taking the rapid breaths at 0:51 in this trailer. Also, there’s the inclusion of Bateman, plus the chemistry between the two ladies that intrigues me. 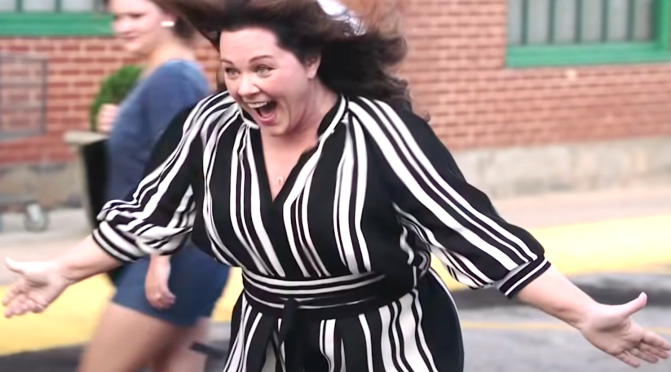 I enjoyed Superintelligence, the latest comedy from Melissa McCarthy, Bobby Cannavale, Sam Richardson and Ben Falcone more than I expected to.

Directed by Falcone, the story of Carol (McCarthy), a woman who’s been selected for observation by the world’s first superintelligence that may or may not take over the world isn’t perfect. Yet, if you’re a fan of the talented film making team and some good dialogue delivered with perfect comic timing; plus, laughter that you can’t always see coming, then give Superintelligence a chance.

Besides the above-mentioned highlights, there’s also the chemistry between Carol and Cannavale’s George to enjoy. And James Corden’s character is quite fun. So much so, that don’t be surprised if, for a good portion of the film, you find yourself thinking:

‘Should this be what a future with a superintelligent AI looks like, I think I’m in!’

As for what I didn’t completely love about Falcone’s movie, there’s the use of several common movie-making/comedy cliche’s that made the story experience that little bit less special.

Furthermore, just when I became comfortable with the direction the story was going in and the nature of the relationships , a semi-expected change happens that follows down a path that’s not quite as satisfying as it could have been. Nevertheless, even though Superintelligence has no chance of taking the place of Spy (2015) as my favourite McCarthy film, I have no regrets about watching it.

Watch it if you’re curious and because the performances are fun.

Imagine your life being turned upside down because you’re selected for observation by the world’s first superintelligence – a form of artificial intelligence that may or may not take over the world.

In new action/comedy Superintelligence, that is the reality of Carol Peters (Melissa McCarthy), the most average person on Earth.

I’m hoping this is a good McCarthy movie because it’s good to see her back; along with Cannavale and Henry.

Who would be your ideal Superintelligence voice?

The Boss, directed by Ben Falcone who co-wrote the story with his wife Melissa McCarthy is a comedy that isn’t quite as unwatchable as Tammy (2014) – the couple’s last collaboration, but that doesn’t mean it’s particularly good either

What’s undoubtable by now is McCarthy’s comedy skills. Unfortunately  I just see The Boss as another movie that’s actually more enjoyable in the format of short comedy sketches. I.e. the film’s trailer or something like an episode of Comedy Central’s Inside Amy Schumer.

The good thing about the comedy sketch / trailer format for this movie is that nobody would have to put up with what in the end feels like story telling minus the commitment required to make it good enough.

As for the notable amount of profanity in the movie, I enjoy creative use of cuss words as much much as most, but in this movie it’s used so much that it actually stops adding to the comedy and borders on tedious and lazy.

I was really hoping that The Boss would have me raving about how much fun it is – as  I did with McCarthy’s last movie Spy (2015). Sadly, The Boss just feels kind of empty and instead makes me want to re-watch Horrible Bosses (2011), a really, rather good comedy.

Good news for Melissa McCarthy fans, for she has a new comedy trailer…

I couldn’t get through ten minutes of Tammy (2014) but I’m giving The Boss a chance because, well, how fascinating is that red wig? In all seriousness however, this trailer good and I did love Spy 2015.

Written and directed by Ben Falcone, The Boss also stars Peter Dinklage and the lovely kristen Bell, an actress I last saw and loved in Stuck In Love (2012).