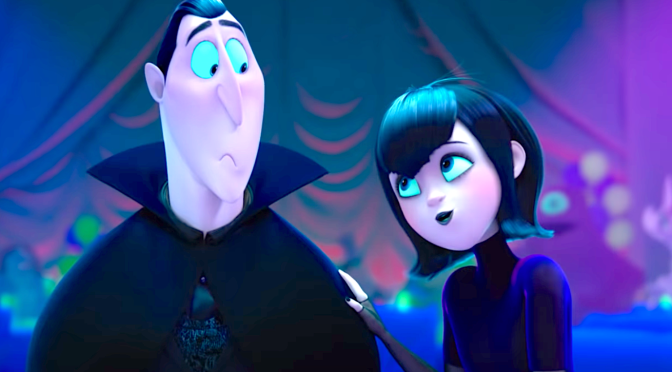 Hotel Transylvania – Transformania is the last chapter in the four-part animated movie series. This time, the monster family appears as you’ve never seen before and it looks like fun.

I wasn’t aware until this trailer that Adam Sandler is no longer voicing Dracula. Hopefully, I won’t miss his voice work too much.

I’m most looking forward to the fun animation but I’ll gladly take the humour too.

After learning that God has plans to destroy the Earth, two low-level angels bet him that they can pull off their most impossible miracle yet to save humanity…

I actually haven’t watched season one of this series but after seeing the trailer for season two, I’m interested. Especially in filling in the gaps between the seasons, since I rather like the humour in the second trailer; which also happens to remind me of the quite fun British comedy series Plebs.

Immediately I failed to warm to Norman (Richard Gere). Not that I was supposed to warm to him exactly, but the fact that writer / director Joseph Cedar’s Norman Oppenheimer is quite the massive nuisance made continuing to watch this movie quite the challenge.

I did however find the strength to continue because I wanted to learn about how the life of a small time operator, a.k.a. New York fixer, a.k.a. total ‘bull**** artist’ would dramatically change. I had to see how his life would change for better and worse after he befriends a young politician at a low point in his life.

In my clearly desperate quest to be there when Norman finally got his comeuppance, I encountered a scene I liked a lot. Namely the wonderfully satisfying moment when Norman gets caught out in one of his many, many lies and he’s outsmarted by a target. That beautifully acted moment at the ‘private dinner’ really helped me come to terms with my decision to continue watching this movie.

As is the case in House of Cards, a political drama where those who are constant nuisances to very powerful people tend to ‘expire’ quite quickly, I imagined that at some point Norman might suffer the same fate. In Cedar’s story, Norman doesn’t quite end up ceasing to exist, but as the synopsis promises, his life does become both better and worse.

A great cast that includes Richard Gere, Lior Ashkenazi, Michael Sheen, Steve Buscemi, Charlotte Gainsbourg and Josh Charles didn’t do badly in their roles. I guess I just generally have little patience for Norman-like nuisances and this movie is all about a massive nuisance called Norman.

Watch it if you like or are curious about small time operators, New York fixer types, total ‘bull**** artists’ and that sort of thing.

Adam Sandler, Selena Gomez and Steve Buscemi are back in the third instalment of the Genndy Tartakovsky directed Hotel Transylvania 3.

This time the action takes place away from the the vacation hotel and instead everything happens on a luxury monster cruise ship.

The monster family are all having a great time catching up on their moon tans but then Drac goes and falls for the mysterious captain of the ship, Ericka and everything changes…

I’ll be tuning in for the ‘easy viewing light entertainment’. I’ll probably also be wondering whose accent I love more; Adam Sandler as Drac in the his Hotel Transylvania movies or Steve Carell as Gru in the Despicable Me films. Both are pretty great to be honest.

Directed and co-written by Armando Iannucci, The Death Of Stalin is a drama / biography loosely based on Stalin – the Soviet dictator’s last days. Starring Rupert Friend, Steve Buscemi, Olga Kurylenko, Jeffrey Tambor and Jason Isaacs, the movie depicts the chaos of the regime after his death…

Undoubtedly, I’m in for the humour and the dialogue. How could I not be with beautifully delivered lines such as the following…?

‘Our General Secretary is lying, in a puddle of indignity.’

‘I may as well just shoot myself, like mother.’

I’m guessing that Jeffrey Tambor isn’t actually playing a Russian that grew up in Russia;. Otherwise how would one explain his American accent?

When I first realised that The Boss Baby was about a smart/adult-like briefcase carrying baby, I feared that as I watched the movie, I’d miss the only other smart/adult-like  baby I’d ever known and loved. I’m of course talking about the lovable Stewie Griffin of Seth MacFarlane’s Family Guy. Luckily, as I watched the Tom McGrath directed animated movie, not for a single second did the delightful Stewie G. pop into my mind. There was simply too much engaging fun, imagination and general cuteness going on in The Boss Baby.

Undoubtably, the person behind the story of The Boss Baby (Marla Frazee) is an individual with a great imagination – not unlike the film’s main character, Timmy (Miles Bakshi), and many other children you may or may not know. Naturally, kids are going to have a good time with The Boss Baby. But thank goodness, you absolutely don’t have to be a kid to like it.

There were some things that happened in The Boss Baby that really reminded me that I was watching an animation, meaning the rules of what may or may not happen in an everyday situation simply have to be discarded completely. Usually I’m fine with suspending my disbelief, but with this movie, for some reason, I was sometimes less able to do so.

My personal favourite animated films are still Finding Nemo (2003) and Ratatouille (2007). This movie, though not as well executed in every way as the aforementioned, it’s still a fun adventure.

Another personal highlight for me was knowing that the dad character was being voiced by my favourite American talk show host, Jimmy Kimmel; a seemingly nice man whose voice I happen to find rather comforting.

The trailer for Norman, the latest movie starring Dan Stevens, Richard Gere, Michael Sheen and Steve Buscemi looks peculiar. Witten and directed by  Joseph Cedar, Norman is the story of Norman Oppenheimer, a small time operator who befriends a young politician at a low point in his life. Three years later, when the politician becomes an influential world leader, Norman’s life dramatically changes for better and worse…

May the changes that happen in Norman’s life make for very interesting viewing because the cast is good. I’m also quite curious about what it really takes to be a so-called ‘operator.’

The second instalment of Hotel Transylvania 2, written by and starring Adam Sandler looks like plenty of fun.

I love that the ‘little monster’ is reminiscent of the completely adorable and mischievous triplets from Disney’s Brave (2012).

No idea how it happens that I actually haven’t seen the original, so now I know what I’m doing this Sunday.