All about the the strange things that start happening to a bartender after he picks up a phone left at his bar, I found that things started to go wrong for me when Hammer’s character made / didn’t make a decision that seemed so obvious to me. And because the rest of the story hung ever so loosely on his character’s decision – one that I did not buy, the film simply lost me and my trust.

In light of this, the real main issue with Wounds is that it barely makes sense. By the very end, I decided that Anvari’s movie is based on a script that needed much more work. Yes, there are moments that were well written and acted but the glaring gaps in the script were simply that, far too glaring.

If you’re a die-hard Hammer and Johnson fan, then sure give it a chance if you’re especially curious, and also if you don’t mind swarming bugs. I definitely watched the swarming bugs scenes through my fingers. Otherwise, it’s very much the tension in the first half of the film that’s most notable.

Have you seen Wounds, the film with the ‘very appealing’ name? Share your thoughts in the comments below.

I’m curious because I like the cast – but then there’s the bugs. The many many bugs and those flesh wounds – with bugs in them!

In new adventure story Peanut Butter Falcon, Zak (Zack Gottsagen) is a young man with Down syndrome who runs away from a nursing home to make his dream of becoming a wrestler come true.

‘Where’s this going?’ That was my initial thought at the start of this trailer. but by the end I was won over, completely. Now I’m in the mood for adventure, humour and I’m looking forward to seeing LaBeouf in a role that doesn’t seem as dark as his other relatively recent ones.

Knowing as I do that 2017’s Fifty Shades Darker did very little to improve on the original Fifty Shades Of Grey (2015) movie, I was ready for this third instalment, Fifty Shades Freed to be in no way a step up… and it isn’t, at all. I do however feel as though the trilogy shifted from ‘bad’ and ‘definitely still bad’ to something that resembles a much-less-tame romantic Hallmark film. To be clear, Hallmark movies are not great either, even though they’re not always as bad as ‘the worst.’

Starring Jamie Dornan, Dakota Johnson, Rita Ora and directed once again by James Foley; in Fifty Shades Freed, Anastasia and Christian get married, but their troubles with people from Christian’s past are far from over.

Just as was the case with the previous two movies, ridiculous and not well written or well acted things happen in Fifty Shades Freed. Yet though not in a movie theatre, I still sat and watched anyway because firstly, I felt like I needed to see the whole trilogy through to the end. Second, I really wanted a glimpse at the wedding. Third, I wanted one more look at a depiction of the ever intriguing lifestyles of the super rich and last but certainly not least, Rita Ora’s gorgeous face, acting.

The Fifty Shades movies always had little chance of being good because of the not so great source material. Even still, that was never going to be enough to stop many of the millions of fans of the book, fans of Dakota Johnson, fans of Jamie Dornan or fans of Rita Ora (me) from watching the films. It also won’t stop some romantics (like myself) who need a very far from taxing romance film to play semi in the background as they sit still whilst doing other equally non-taxing things.

Whatever your reason to watch or not, your decision is probably right, for you. Also, if you start and promptly abort, you also cannot be blamed.

Read my spoiler-free movie review of Bad Times At The El Royale  (2018).

Directed by Drew Goddard, new thriller Bad Times At The El Royale is set in a rundown hotel with a dark past. A hotel where seven strangers with secrets to bury have one last shot at redemption – before everything goes to hell.

With such a great cast and promising trailer, I say bring on the style, colour and madness.

It’s that time again! Time for the next movie in E.L. James best selling Fifty Shades trilogy. Jamie Dornan, Dakota Johnson and Rita Ora are joined by Arielle Kebbel in Fifty Shades Freed. This time Christian and Anastasia are an official couple and Anastasia finds herself still haunted by Christian’s past…

You may have already guessed but I’m not watching this movie because I’m expecting great things. I’ve seen the first two so I pretty much know what I can expect in terms of the general gist of the story, the often questionable dialogue and phrases I’ll be forced to verbalise such as, ‘what rubbish!’

The key reason I’m tuning in is because as per a great quote from one of the characters in an old classic British sitcom called Desmonds, ‘You can’t swallow a whole cow and then choke at the tail.’

Additionally, I really, really, REALLY, very much want a good look at that stunning wedding dress.

Everyone I’ve met who has watched any of the Fifty Shades movies knows that they’re the kind of films unlikely to win, let alone be nominated for any seriously prestigious  awards. I’m sure there are others out there who think otherwise; I just haven’t met them.

A friend warned me to stay away from the books because ‘they’re not well written’. I’ve wisely heeded her advice. The reason I’ve gone ahead and watched the second movie, Fifty Shades Darker, even though there was very little in the first instalment that proved particularly memorable is… my mild curiosity about Christian Grey. Particularly how his ‘challenges’ will be explained. I’m a sucker for trying to understand people, you see.

In the movie, some light is shed on Christian’s past, though nothing especially memorable sticks out. We meet a few of the women that have been in Grey’s life before Anastasia Steele (Johnson). There’s more of all the stuff people couldn’t stop talking about in the first movie. A few other things happen. Things that you’d need to watch the movie to find out about  because I just remembered how nonsensical I found most of it. I even admit that I literally uttered the words, ‘What is this nonsense?’

This time directed by James Foley; Dakota Johnson and Jamie Dornan did the best they could with the material they had. I guess this period of their careers can be labeled as the ‘laughing all the way to the bank as people criticise their movie’ phase. At this point I really have to wonder if the Fifty Shades films have become that thing I love to hate. Maybe. Also, everyone knows that ‘haters’ are often fans, albeit confused or in denial. If I’m a fan, I’m mostly a fan of how the writer E.L. James has succeeded regardless of her apparently questionable writing ability. 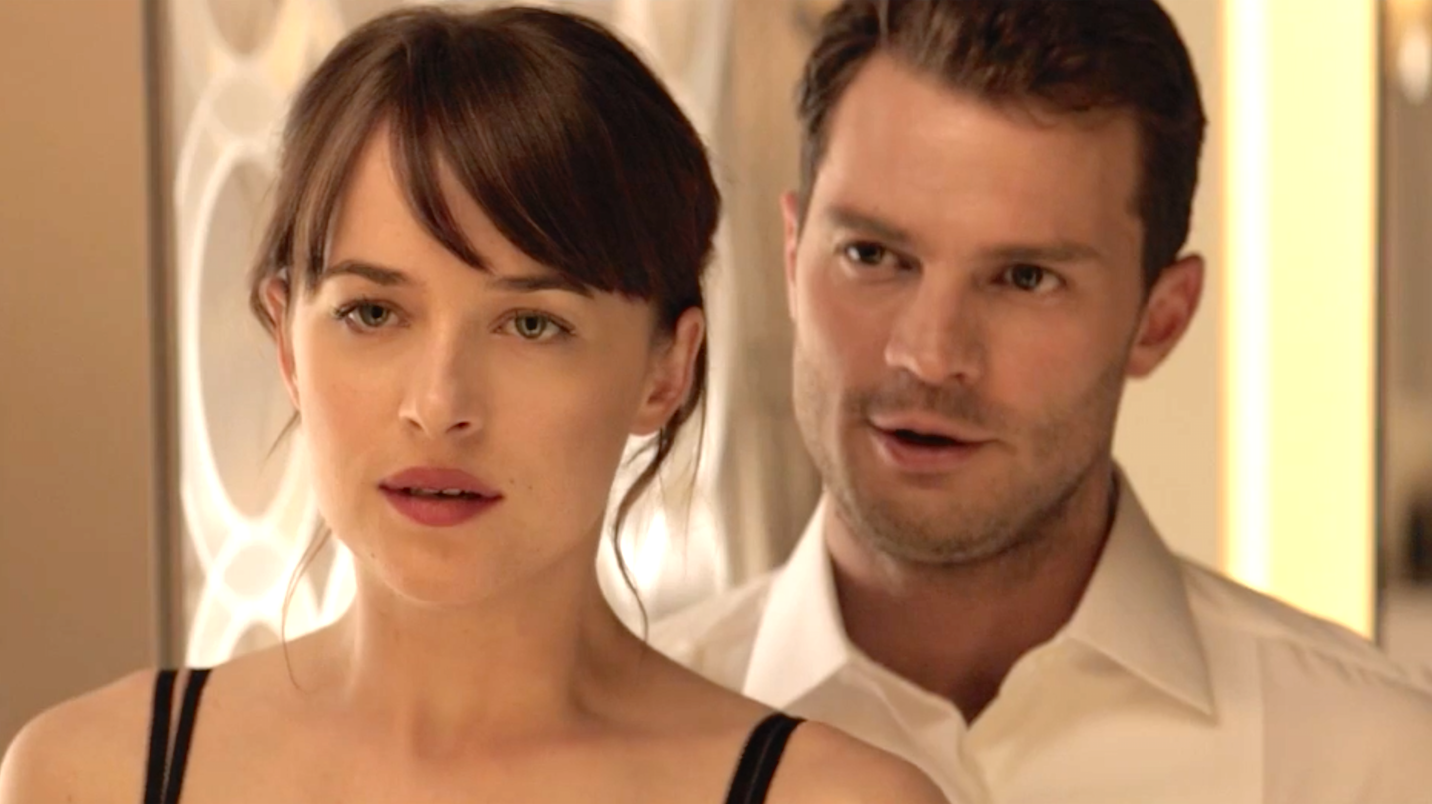 Anastasia Steele and her tormented billionaire boyfriend Christian Grey are back, in writer E.L. James’s Fifty Shades of Grey sequel. Starring Dakota Johnson and Jamie Dornan, Fifty Shades Darker has Steele dealing with the anger and envy of Christians past loves while Grey wrestles with his inner demons…

I’ll be watching because Christian intrigues me. I also want to see what director James Foley can achieve given the quality of the material.