Often when movies are described as a slow burn, my heart sinks a little because it can mean that the pace is lacking in the most unsatisfying way. Luckily, it just so happens that The Good Nurse, the latest biography/crime/drama from Danish director Tobias Lindholm is the kind of slow burn you want people to mean when they describe a movie as such.

Smartly shot, well-edited and acted, Lindholm’s movie is based on a true story about an infamous caregiver who is linked to the deaths of hundreds of hospital patients.

Oscar winners Jessica Chastain and Eddie Redmayne both deliver notable performances. Additional highlights include the camera work, how dramatic and quieter moments are captured, plus the pairing of Noah Emmerich and Nnamdi Asomugha in their specific roles.

Watch The Good Nurse for a welcome reminder of how highly engaging a film described as a slow burn can be. 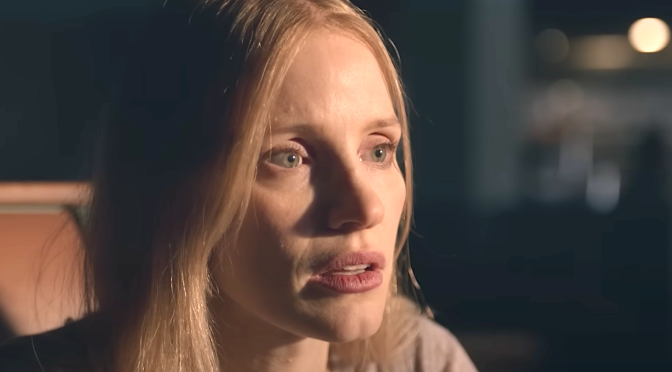 Read my spoiler-free movie review of  The Good Nurse (2022).

New biography/crime/drama The Good Nurse follows an infamous caregiver who finds themselves implicated in the deaths of hundreds of hospital patients.

I’d been missing seeing Redmayne on screen, so I’m watching this for that reason and the chilling fact that this is based on a true story.

As someone who has resisted looking up details about the truth about these characters, I’m now especially curious to understand the thinking behind the ‘one neck, two heads’ artwork above. I’m scared that the truth is far darker than this trailer suggests. There’s of course, also a chance that I’m seriously overthinking matters. Still, I’m cautiously excited to find out.

Jessica Chastain, Andrew Garfield and Vincent D’Onofrio are the stars of new drama/biography The Eyes of Tammy Faye.

From director Michael Showalter; what’s on offer is an intimate look at the true story of the extraordinary rise, fall and redemption of televangelist Tammy Faye Bakker.

Tammy Faye and Jim Bakker’s story isn’t one I’m familiar with. And so I look forward to learning about it all thanks to what appears to be excellent performances, and hopefully a well-executed story.

Anyone else notice how super adorable Chastain’s character is, especially at the start of this trailer?

A spy movie about five women working together to stop a global organisation from acquiring a weapon that could thrust the world into total chaos.

First of all, is it just me or does Lupita’s outfit in teh above photo suggest Harry Potter?

Secondly, what a lovely mix of talent. I’m excited to see what the group chemistry is like and hoping to enjoy this more than I did Chastain’s last movie, Ava (2020).

Even though I definitely can’t say I had a great time during all of the two hours and forty nine minute run time of of director Andy Muschietti’s IT Chapter 2, the last hour or so was pretty thrilling.

Starring James McAvoy, Javier Botet, Jessica Chastain, Bill Hader and Bill Skarsgård, I had to watch this final installment of the IT (1990) remake because the cast and trailers were great. I was also determined since this was essentially my last chance to see if I found any of the IT movies scary all. I definitely had a lot of feelings throughout but unfortunately, once again, scared really wasn’t one of them. At the very best I was very grossed out by the scene with the 8 plus legged severed head. I enjoyed much of the visual effects and the acting. Unlike in the 1990 IT film, this time both the children and the adult versions of the children performed pretty well.

As for the question of why the first hour and forty minutes of IT Chapter 2 wasn’t great, it certainly didn’t help that due to the editing and some characters looking similar, I didn’t find it easy to follow in terms of who was playing the adult version of whom. The other key reason is the pace. I know that much of the film is set in Derry, Maine which is essentially a slower moving place than a city, but that doesn’t mean the story had to move that slowly, surely? I remember that an hour into the film, I found myself disappointed to not even be half way through the movie.

There were also unfortunately some moments where I couldn’t fully suspend my disbelief. Firstly, the biting of the little girl’s head; how on earth did she not scream? Secondly, at the reunion dinner, how did it take so long for the restaurant workers to check on the disturbance, especially considering all the screaming and banging? Last but not least, the scene where Chastain’s character performs a certain feat of strength towards the end. I just don’t honestly believe she possessed the physical strength required to do what she did.

Overall though, thanks to the good performances – particularly by McAvoy and Chastain, plus the fun special effects, IT Chapter 2 is worth watching, if you’re curious. Especially so if you have more patience than I.

Lastly, I couldn’t help but conclude by the end that Muschietti’s film seems to be quite a good advert for why therapy is important and often a good idea.

The first thing I noticed with this impressive trailer is how wonderfully creepy Skarsgård looks as Pennywise. The second is the brilliant casting of most, if not all of the adult versions of the kids in the movie.

As established in IT (2017), evil in the shape of scary clown Pennywise likes to revisit the town of Derry Maine every 27 years.

Starring James McAvoy, Bill Skarsgård, Javier Botet and Jessica Chastain, all the young members of the ‘Losers Club’ are now grown up and and living far from Derry.

That is until a devastating phone call takes them right back…

What a delightfully creepy trailer!

I’ve mentioned a few times that I like clowns so I haven’t yet found any of the IT movies especially scary. At least not in a way that’s nightmare inducing. As such, I’ll be watching director Andy Muschietti’s new movie to see if that changes.

I also need to confirm that I won’t find the acting by the young cast members in the 2017 movie more convincing than that of the adults in this new version. Reason being, that was my precise opinion about the performances in the original 1990 IT film.

Starring Jessica Chastain, James McAvoy, Nicholas Hoult, Jennifer Lawrence, Michael Fassbender and Sophie Turner, X-Men – Dark Phoenix is all about their team member Jean Grey’s new incredible corrupting powers and how the rest of the X-Men deal with it…

I’m in to enjoy the stunning visual effects and find out if Jean Grey will fully embrace her dark side. Before doing all that though, I’m a tad behind so I just need to watch all the movies after X-Men First Class (2011).