Nine Days is a new drama/fantasy film about a reclusive man as he conducts a series of interviews with human souls, to determine which one can be born on earth.

I’m so curious to see how the topic of ‘pre-life’ will be covered because I have so many questions. For example, what is pre-life really like and why is life on earth so very appealing? To what extent can a soul know the type of life experience they’re likely to have once on earth? How much joy versus suffering? What kind of human being are they likely to become? And so on.

In part because of the premise, this trailer and the one for Sound of Metal are in my top five of 2020’s best indie trailers.

Even though I definitely can’t say I had a great time during all of the two hours and forty nine minute run time of of director Andy Muschietti’s IT Chapter 2, the last hour or so was pretty thrilling.

Starring James McAvoy, Javier Botet, Jessica Chastain, Bill Hader and Bill Skarsgård, I had to watch this final installment of the IT (1990) remake because the cast and trailers were great. I was also determined since this was essentially my last chance to see if I found any of the IT movies scary all. I definitely had a lot of feelings throughout but unfortunately, once again, scared really wasn’t one of them. At the very best I was very grossed out by the scene with the 8 plus legged severed head. I enjoyed much of the visual effects and the acting. Unlike in the 1990 IT film, this time both the children and the adult versions of the children performed pretty well.

As for the question of why the first hour and forty minutes of IT Chapter 2 wasn’t great, it certainly didn’t help that due to the editing and some characters looking similar, I didn’t find it easy to follow in terms of who was playing the adult version of whom. The other key reason is the pace. I know that much of the film is set in Derry, Maine which is essentially a slower moving place than a city, but that doesn’t mean the story had to move that slowly, surely? I remember that an hour into the film, I found myself disappointed to not even be half way through the movie.

There were also unfortunately some moments where I couldn’t fully suspend my disbelief. Firstly, the biting of the little girl’s head; how on earth did she not scream? Secondly, at the reunion dinner, how did it take so long for the restaurant workers to check on the disturbance, especially considering all the screaming and banging? Last but not least, the scene where Chastain’s character performs a certain feat of strength towards the end. I just don’t honestly believe she possessed the physical strength required to do what she did.

Overall though, thanks to the good performances – particularly by McAvoy and Chastain, plus the fun special effects, IT Chapter 2 is worth watching, if you’re curious. Especially so if you have more patience than I.

Lastly, I couldn’t help but conclude by the end that Muschietti’s film seems to be quite a good advert for why therapy is important and often a good idea. 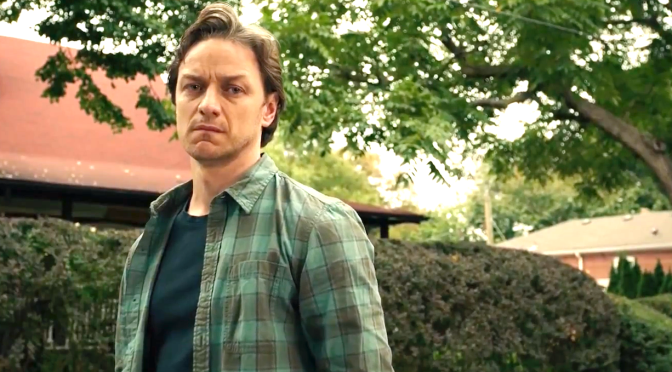 As established in IT (2017), evil in the shape of scary clown Pennywise likes to revisit the town of Derry Maine every 27 years.

Starring James McAvoy, Bill Skarsgård, Javier Botet and Jessica Chastain, all the young members of the ‘Losers Club’ are now grown up and and living far from Derry.

That is until a devastating phone call takes them right back…

What a delightfully creepy trailer!

I’ve mentioned a few times that I like clowns so I haven’t yet found any of the IT movies especially scary. At least not in a way that’s nightmare inducing. As such, I’ll be watching director Andy Muschietti’s new movie to see if that changes.

I also need to confirm that I won’t find the acting by the young cast members in the 2017 movie more convincing than that of the adults in this new version. Reason being, that was my precise opinion about the performances in the original 1990 IT film.

IT, the horror / drama that centres around seven children in Derry, Maine who are terrorised by a monster in the shape of a clown called Pennywise is a story I first encountered when I saw the 1990 IT TV movie for the first time just two years ago. Having found it not at all scary, I was hoping that the latest version would be more terrifying.

The good news is, this new IT kind of is more scary. Director Andy Muschietti’s film features makeup, prosthetics and special effects that are objectively speaking, better and more unsettling than in the first movie. As for the real question of whether I personally was actually scared, I have to say no, not really. The reason is because clowns are still just cute to me overall – no matter how many teeth they may have. They remain in my heart and mind as providers of joy at children’s parties.

I say all the above not to take anything away from Bill Skarsgård’s rather engaging performance, because he played Pennywise rather well. I especially like the first time he meets young Georgie – precisely the second he stops fake smiling. I knew then that I was likely to see something memorable. Yet, even with Skarsgård’s great work, at no point during IT did I jump out of my skin or hide behind my hands. I just took in and appreciated the things that Muschietti’s movie did well. For example, casting Skarsgård, featuring generally convincing prosthetics, some good visuals, special effects and the commentary on bullying.

The only disappointment where special effects is concerned is regarding the scene with the blood in the bathroom. I don’t believe that the red colour and the consistency of the blood was quite right… not that I’m a specialist, of course.

The following is not a complaint, but since the adult counterparts of the children are not featured in the new film (because that’s what sequels are for), I can’t really speak on any instances of overacting on their part, as was the case in the first movie.

Watch IT because you love the bestselling novel by Steven King, the one on which the IT films are based. Watch it for Skarsgård’s performance, the clown attire / makeup and to see if you’re terrified. If you’re already scared of clowns, then you will need your hands to hide behind. Otherwise, enjoy.

IT is a movie based on one of horror / thriller writer Stephen Kings most popular books. It’s a story about the seven children in Derry, Maine who were unfortunate enough to encounter a monster in the shape of a clown called Pennywise…

I’ve never been scared of clowns and since I also haven’t watched the 1990 TV movie of King’s book, I thought the above trailer would get me to the place where clowns become, you know, scary.  However, as well made as this trailer is, I honestly didn’t jump once. I just don’t think clowns scare me. They’re too colourful and synonymous with fun in my mind.

I think I’m going to have to watch this movie just to know, for sure precisely where I stand with clowns. As someone who usually avoids horror for the sake of peaceful sleep, I’ll watch IT as early as possible in the day, just  so that by night time, I’d have forgotten all about it. Sounds like a great plan to me, I know you agree.