Set in the wake of a major scandal at an early morning news channel, The Morning Show follows the unique challenges faced by the men and women we trust to tell the truth, and what happens when they prove themselves to be dishonest…

Aniston and Witherspoon on screen together; that’s a key reason I’m looking forward to this one. I’m a fan of Carell, Mark Duplass and Gugu Mbatha-Raw too, of course.

I was also listening quite closely when Crudup’s character said ‘Watching a beloved woman’s breakdown is timeless American entertainment.’ Now I know that I can’t wait to see how said woman will be fighting back.

The Morning Show brings to mind Gabrielle Union’s Being Mary Jane. I’m curious about the ways it’ll be different.

There’s no denying that Murder Mystery, the latest movie from Jennifer Aniston and Adam Sandler gave me some laughs. The Kyle Newacheck directed comedy about an American couple who find themselves framed for murder while on a European vacation definitely brought the Sandler / Aniston on screen magic.

To elaborate, even though the murder investigation scenes barely proved engaging, I really liked the moments when it was just Aniston and Sandler’s characters talking to each other. Their comedy dynamic as a married couple is great. In fact, I’m almost certain that if Murder Mystery had just been Aniston and Sandler’s characters finally taking a vacation in Europe; bickering among themselves, enjoying and learning about the billionaire lifestyle but definitely minus the murder mystery elements, I’d probably have liked this movie that much more.

There was indeed room for the murder mystery to be better executed or perhaps that portion of this story just proved too cliché for me to appreciate. Nevertheless, I have no regrets because of the moments I did enjoy. Moments that also include the joke on the plane about the alternative earplug suggestion, and the scenes with Aniston and / or Sandler that featured Luke Evans’s very charming Charles Cavendish character.

Last but not least, one more key highlight is when I saw British comic David Walliams show up on screen. A truly joy-inducing moment for me personally because his character transported me back to the times when I watched his great work in the BBC’s hit comedy series Little Britain.

I say watch Murder Mystery if you’re curious about the highlights mentioned above. Maybe you’ll love it all even though I couldn’t.

Directed by Kyle Newacheck, Sandler is a cop on a European vacation with his wife (Aniston) when they end up on the run after being framed for murder…

I like Aniston and Sandler on screen together and I actually can’t wait to find out who the murderer really is. I’m thinking that if the answer isn’t ‘all of them – except the Americans’, it’s probably Evans’s character. I’ve already ruled out the general with the eyepatch because it would be too obvious. You know, considering his deliberate handling of the murder weapon in front of everyone.

Starring Jennifer Aniston, Danielle McDonald and Odeya Rush, I had some fun Watching Dumplin’, the comedy / drama about Willowdean a.k.a  Dumplin,’ the plus-size teenage daughter of a former beauty queen.

Directed by Anne Fletcher, the story really gets underway when, to the surprise of many in their small Texas town, Willowdean starts a revolution by signing up for her mom’s Miss Teen Bluebonnet pageant.

I wanted to watch Dumplin‘ because of Aniston and the promise of some humour. There is a little humour involved and the messaging about inclusion, representation and love of self are indeed adequately executed. I also  enjoyed witnessing the positive evolution of a strained mother / daughter relationship and seeing a teenage girl find her confidence.

Though everyone did well in their roles, a part of me does wish that Dumplin’ had been a tad more amusing and fun. A similar movie that I had that little bit more fun watching is Don’t Talk To Irene (2017),which I recommend.

Dolly Parton’s music features quite a lot in Dumplin’ and she’s often mentioned. So… if you’re a fan, you know what to do. Another reason to watch Dumplin’ to see Aniston have fun in her role as a small town Texas woman. The idea alone just makes me smile.

In new comedy / drama / musical Dumplin‘, the plus-size teenage daughter of a former beauty queen decides to sign up for her mom’s Miss Teen Bluebonnet pageant. Doing so ends up revolutionising the pageant and their small Texas town.

Reasons to be excited about this one include the promise of humour, the fact that I enjoy Aniston in comedy roles and Harold Perrineau in drag as ‘Rhea Ranged.’

In The Yellow Birds, two young soldiers, navigate the terrors of the Iraq war while one of them is tortured by a promise he made before their deployment.

What an exciting cast. I can’t wait to find out what the deep dark secret is. PerhapsThe Yellow Birds will join The Hurt Locker (2018) as one of my favourite war movies. 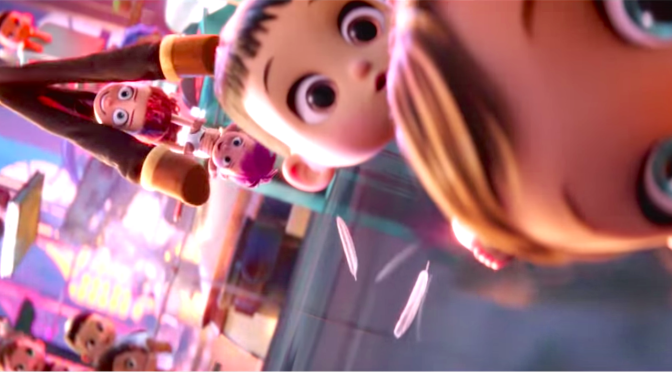 Storks is an action / adventure / comedy set in a time when storks deliver packages instead of babies; but then a brand new baby order appears and a stork must what? ‘Always deliver,’ of course.

Starring Andy Samberg, Kelsey Grammer, Ty Burrell, Jennifer Aniston and Katie Crown, Storks is definitely fun and funny. Though it’s not my favourite of the animated films I’ve seen in 2016, I did enjoy the cuteness of all the babies, the nature of Hunter’s relationship with the little birds, the very unique skills of the wolf pack and the general adorableness of Nate Gardner.

There’s also that beautiful song at the end, ‘Fire and the Flood’ by Vance Joy; a singer who just happens to look like a smaller version of comedy actor, Josh Gad.

In case like myself you rather like the idea of storks delivering babies instead of the usual pain fest that’s actual labour, there’s a slight chance that you may find yourself feeling a little blue by the end of this movie, but luckily not for too long.

Watch Storks for all the good things mentioned above. Lastly, had it not been for the end credits, there’s no way I’d have guessed that Junior is voiced by Andy Samberg, such is his great vocal range.

Office Christmas Party is the latest comedy from Jennifer Aniston, T.J. Miller, Olivia Munn and Jason Bateman. Directed by Josh Gordon and Will Speck, the story includes a bunch of grownup office workers partying hard and behaving quite badly…

Ill advised as it may be, Jennifer Aniston and my love for her work on Horrible Bosses (2011) is the key reason I’ll be tuning in. Not that I  want a carbon copy but I’d much rather this movie be like Horrible Bosses than  The Night Before (2015). The former was brilliant but the latter, not so much…

May this also be nothing like Sisters (2015), a movie similar to The Night Before in the way that it features grownups unconvincingly doing things and behaving in ways that would make sense for teenagers.