Directed by  Bert & Bertie Troop Zero is set in rural 1977 Georgia where a competition offers Christmas the chance to be recorded on NASA’s Golden Record; and so so begins the recruitment of Troop Zeroa makeshift group of Birdie Scouts…

It’s Janney, Davis and there’s humour, so I’m definitely interested. I’m perhaps even more intrigued since this looks like a far less emotionally taxing role for Davis than her usual. I wonder if she’ll cry at all. Maybe just a single tear.

At first all is well in the home of demonologists Ed and Loraine Warren. That is until Annabelle, a possessed doll with the power to awaken evil spirits is let out from behind the sacred glass.

Based on the story by James Wan, Annabelle Comes Home is directed / co-written by Gary Dauberman…

I haven’t seen any of the other Annabelle movies but this trailer makes me curious and Grace is a wonderful young Actor.

Based on the novel by Shirley Jackson, The Haunting Of Hill House is a new Netflix series about five siblings who grew up in Americas most famous haunted house.

I’d call this ‘nice and creepy’ for fans of scary movies. I’m not the biggest scary movie fan but I do appreciate this story’s rather compelling premise and how well made this trailer is.

Directed by Anna Boden, Ryan Fleck and set in the 1990s, Captain Marvel is the story of Carol Danvers. Danvers becomes one of the universe’s most powerful heroes when Earth is caught in the middle of a galactic war between two alien races.

Once again, another well edited trailer from Marvel Studios and featuring just the right music.

I’m in to see what I think is Marvel’s first female superhero movie. The ‘Earth caught in the middle of a galactic war between two alien races’ scenario is certainly very intriguing too. I wonder if I’ll still love Wonder Woman most after watching this movie.

I, Tonya is the true story of competitive ice skater Tonya Harding (Margot Robbie), a skater who rose amongst the ranks at the U.S. Figure Skating Championships. However, unfortunately for her, things change drastically when her ex-husband intervenes.

I’m watching because it looks like this movie really allowed Robbie to act her socks off – so to speak and I personally can’t ‘wait to see how that unfolds. I’m also curious about the scary truth of this story.

How To Be A Latin Lover centres around Derbez’s character – Maximo; a man who’s forged a career out of seducing rich older women. Unfortunately for him, however, his 25 year marriage just ended and with nowhere else to go, he finds himself living with his estranged sister.

Quite early in the movie, I realised precisely how the story was going to go. A lot of what I realised could have been guessed during the trailer; only, I was far too busy being amused. I stayed with the movie until the end because of the reasons I already mentioned – but additionally, I happened to be in the mood for a film that didn’t require too much from me. The often silly humour was OK. Though, the ending did seem to come about quite abruptly – and in a way I wasn’t fully expecting. Overall, I can say I regret nothing because I knew what I’d signed up for. My love of Hayek remains and Derbez… He’s OK.

I can’t say that I picture myself telling people ‘you simply must see this,’ but I do see myself at some point in the future, referencing the scene in the trailer with the shoe dye and the pool.

Starring Salma Hayek, Rob Lowe, Michael Cera and Eugenio Derbez, How To Be A Latin Lover is a Ken Marino directed comedy about a man who made a career of seducing rich older women. However, he now finds himself living with his estranged sister after his 25 year marriage ends…

I’ll mainly be tuning in in hopes of good humour and because of my general love for Salma Hayek. 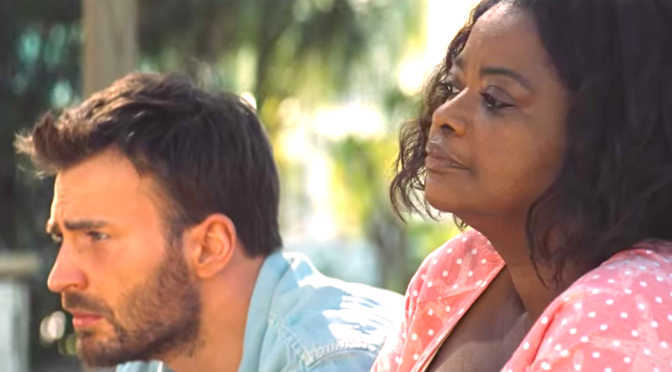 At the heart of  Gifted, the latest movie starring Chris Evans, Octavia Spencer and Jenny Slate is a custody battle over a child prodigy played by Mckenna Grace…

I’m intrigued by this one, though certainly not as much as I would be had the trailer not been a mere whisker from being a short film. Actually, scrap that. This is a ‘short film’, a.k.a.,  a lazy **s, far too long 2:34 minutes that substitutes a genuinely interesting and creative tease for a ‘show everything but the credits’ sad excuse for a trailer.

There. Now that my true feelings are out, should you want to see the much longer version, you can – in approximately six months from now. I may, I may not.