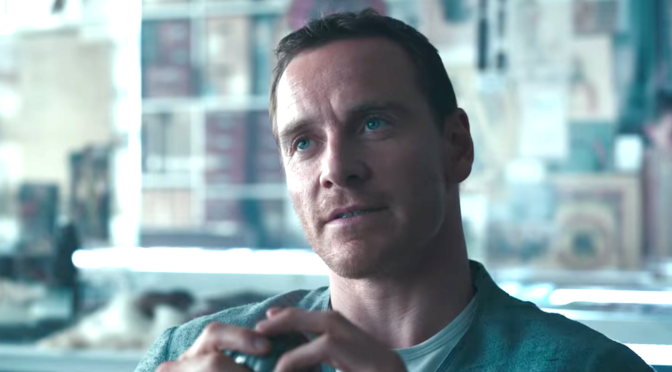 Today’s trailer is for Assassin’s Creed and it’s exciting, particularly for fans of the computer game. I’m very happy because the trailer looks great and the movie’s stars are Michael Fassbender and Marion Cotillard…

Though I’ve never played the game,  I’m aware of it because it’s popular and I love the artwork,  including Aguilar’s costume. This may or may not mean that I have a crush on a computer game character…

The director is Justin Kurzel who has also worked with Fassbender and Cotillard in the visually stunning Macbeth (2015).

A proper trailer has finally arrived for the Ghostbuster reboot. Kate McKinnon, Leslie Jones, Melissa McCarthy and Kristen Wiig are the stars…

I enjoyed the hat, wig and glasses combo. I Also liked the delivery of the slaps and MacKinon’s yellow lensed glasses. Beyond that, I’m going to wait and see.

Is it just me or do the special effects seem rather dated?

I want to say that ‘here you have it, the first Ghostbusters trailer has finally landed!’ But as you’ll soon see…

It’s not all bad. The music works with the visuals. In fact, it’s really exciting at first because you think it’s leading to a moment of revelation. Only there is sadly, no revelation.

Pointless is a word that comes to mind for this teaser to a teaser trailer. I’m still excited about this reboot because it stars three great ladies of comedy; Kristen Wiig, Melissa McCarthy and Kate McKinnon. The director, Paul Feig is the man behind Bridesmaids (2011) and most recently the very entertaining Spy (2015) so on hope lives!

One of the best executions of a teaser teaser trailer I’ve ever seen is for Deadpool (2016).

In just over two weeks (March 3rd 2016), we’ll have the next Ghostbusters trailer. All I have to say is, may it be good enough to make up for the above, dare I say, nonsense. Chris Hemsworth, Michael Kenneth Williams and Andy Garcia also star.

The Gambler, directed by Rupert Wyatt and starring Mark Wahlberg is a film that centre’s on the troubles Jim Bennet.

Bennett, played by Wahlberg is a man whose continued self destructive behaviour, especially at the most unexpected times, makes it clear to the  audience early on, that here is an individual in the midst of a very serious existential crisis.

It’s apparent that Bennet has pain, but you’ll have to use your imagination for a much deeper explanation than the familial issues hinted at more than twice.

This isn’t the type of movie that plays easy. Some may even accuse Wyatt’s film of being somewhat uneven. True or not, the audience is definitely never left comfortable.

Either the viewer is quite rightly concerned for Bennett’s safety and the safety of those he cares about or they’re worried as to why he really doesn’t seem to care much about the consequences of his seemingly reckless actions.

The best thing about The Gambler for me, besides the individual performances (John Goodman being a particular highlight), is the dialogue. An element most would have had a taster of in the very well executed promotional trailer a few months earlier.

My exposure to Mark Wahlberg’s work has been largely focused on his comedic roles, so this was an overdue and welcome difference.