You wait ‘200 years’ for the most compelling story, and finally, it comes.

Written/directed by Benjamin Cleary; Naomie Harris, Glenn Close and Mahershala Ali are the stars of Swan Song, a new drama/sci-fi with a trailer so very intriguing that I dare not explain the premise, for it is best experienced…

To say that Ali is the perfect actor to play this role feels like an understatement. I am a massive fan of what he can do without words.

There’s no doubt that very big tears are going to flow while watching this one, but I suspect it will all be worth it.

I’m excited to find out if things turn out as Ali’s Cameron Turner expected. I sure hope the answer is yes. But considering that he signed up for something experimental, who’s to know?

In addition to season one of Ted Lasso (2020) and season one of The Morning Show (2019), this is definitely one of my favourites of all the trailers that Apple TV+ has ever released.

Tell me you’re as excited as I am about this very promising story. Tell me, at once! 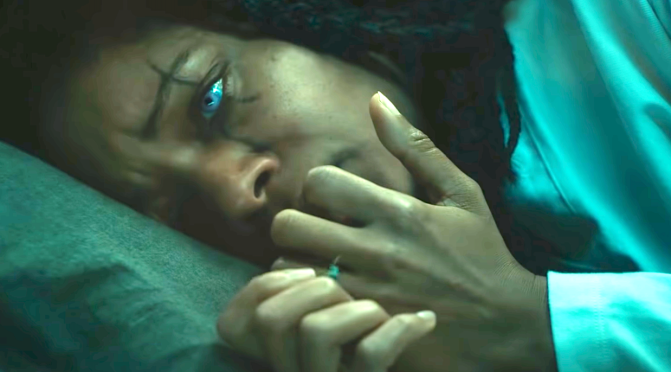 I’m most excited about what Harrelson will bring to his role. And I hope that I’ll like this sequel better than I did the first movie. The effects seem to have improved, which is great.

A story where the line between reality and fantasy starts to blur for a man who visits a mysterious Island off the British coast.

My love for a good mystery has me intrigued. Especially considering how very creepy some of the residents of ‘paradise’ appear to be.

I now find myself wondering which ‘British island’ this was actually filmed on.

In Black and Blue, the latest action / drama starring Naomie Harris, Harris plays a rookie police officer whose body camera captures a corrupt cop shooting a drug dealer. What I hoped would have followed is a truly engrossing, gritty and desperate race against time to get the footage in the right hands.

The race and subsequent pursuit does happen. It’s just that the end result isn’t as gripping as I’d hoped. The acting isn’t bad, but the story and execution certainly could have been stronger. Especially since soon after the film started and throughout, it felt as though something important was missing, and nothing refreshingly clever and / or new happened.

I really wanted Black and Blue to join Training Day (2001) on my list of favourite cop movies. However, even though both films share commonalities in theme / story, the gap between the two movies is simply too large – because Training Day is far more engrossing, cleverly written and well executed. Plus, Ethan Hawke’s character didn’t make any decisions that had me mad. Whereas Harris’s character did some thing’s that could hardly be excused by her rookie status. Or maybe I’ve simply watched too many cop movies.

I did actually like aspects of the way Black ad Blue handled Harris’s character’s ‘identity crisis,’ which really says more about her acting than anything else. Also, there were moments within Black and Blue that had me thinking, ‘Yes! This is when things really get good‘. But the movie never went to the point of having a scene that I could choose as my favourite moment.

Read my spoiler-free movie review of Black and Blue (2019).

While wearing a body cam, Alicia (Harris), a rookie Detroit African-American female cop stumbles upon corrupt officers as they murder a drug dealer…

First and foremost, isn’t this just a great role for Harris? I can’t wait to see how things turn out considering Alicia’s identity crisis. She better win even though statistically the odds aren’t great.

It would be great if this movie could join End Of Watch (2012) and Training Day (2001) on my list of favourite cop movies.

A King Kong – like story combined with the end of the world, except that Johnson is playing a regular hero not a super one with a cape.

I’ll probably watch just to see how much of Johnson’s one liners I can take before I’ve had enough. In other words, I’m tuning in on the strength of The Rock’s charisma. A great reason, obviously.

There are a number of reasons to like 2017 Best Picture Oscar winner Moonlight. The beautiful cinematography, faultless performances and a timely telling of a very important story are just three of them.

Thanks to Barry Jenkins’ very personal movie, I now know of Mahershala Ali, a very skilled actor whose Moonlight character Juan isn’t even in the movie throughout but there’s no forgetting him; if only for all that Ali was able to expertly convey, especially through his eyes.

Moonlight is a coming of age story about the childhood, adolescence and burgeoning adulthood of a young, African-American gay man growing up in a rough neighbourhood in Miami. It’s a film that reminded me of the very important and often pivotal role that the kindness of a stranger / strangers can have in our lives.

Watch it because it’s a story beautifully told and you too may find yourself remembering the perfect strangers that may have helped you become all that you’re grateful to be.

I may have shed a tear or two because Collateral Beauty is a story about a father unable to function after his six year old daughter passes, but that doesn’t mean it was a ‘weepy’ holiday film done well.

Starring Will Smith, Kate Winslet, Helen Mirren, Keira Knightley, Edward Norton,  Naomie Harris and Jacob Latimore, the signs that the David Frankel directed  movie wasn’t going to be the best experience overall, started with me finding myself irritated by Will Smith’s mourning face – within the first 20 minutes. Not really great since he spends at least 95% of the film wearing said face.

In addition to my apparent impatience with seemingly prolonged periods of misery, I was disappointed that Collateral Beauty didn’t come together as well as I’d hoped. There’s something about the pace and edit that didn’t sit well with me. Mainly however, I find myself leaning towards the quality of the story as another reason for why my experience was underwhelming. Perhaps I didn’t get to spend enough time with Howard (Smith)  before his tragedy. Had I done so, I may have cared more deeply about his distress. Most of the cast if not all are almost too talented for their performances to be the problem.

The few moments of humour between Winslet, Norton and Pena’s characters is my main highlight. I also liked the dialogue when Keira Knightly’s character is literally on stage and reading her lines to the young man played by Latimore. I was quite taken at this point. Beyond these few brief moments where I’m really engaged, the only other aspect of Collateral Beauty that made me happy is the imagery of New York City. I really do miss that place.

Watch this movie if nothing will stop you but I’d say don’t expect great things.