Based on the book of the same name by J.D. Vance; Hillbilly Elegy is a new drama starring Amy Adams, Haley Bennett, Gabriel Basso and Glenn Close.

Directed by Ron Howard; it’s the story of a Yale law student (Brasso) who’s drawn back to his hometown where he grapples with family history, Appalachian values and the American dream.

Glenn Close and Amy Adams, that’s really all I needed to know before saying yes to watching this. And maybe Adams will finally win an Academy Award, because this here looks like a truly brilliant performance.

Also starring Wyatt Russell, it’s the story of Anna, an agoraphobic woman living alone in New York. Anna begins spying on her new neighbours only to witness a disturbing…

I’m in for the fantastic cast and all the mystery and darkness.

Actually, at first I thought this was going to be purely about one woman’s struggle with agoraphobia – which would have been fantastic. Still, I’m not too disappointed because this still looks great.

The Woman In The Window, Netflix

Written / directed by Adam Mckay, Vice is the story of Dick Cheney, the most powerful Vice President in history, and how his policies changed the world as we know it.

I’m certainly happy to let this brilliant cast teach me some things about American / World history. I actually didn’t realise how much I’d missed watching a Christian Bale movie until this trailer.

It’s true that I’d have liked to see Bale’s  everyday face but then he wouldn’t be playing this character. I’ll be remedying the situation by rewatching America Psycho (2000) and /or restarting the best Batman movies ever made, in my humble opinion. 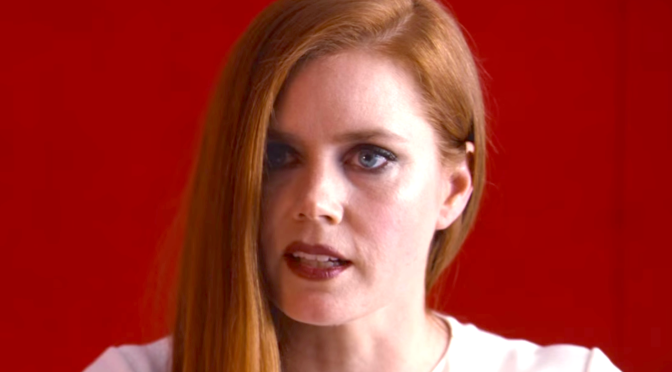 Nocturnal Animals which stars Jake Gyllenhaal, Amy Adams, Aaron Taylor-Johnson, Michael Shannon and Isla Fisher is the second movie from fashion designer / movie director, Tom Ford. As an appreciator of Ford’s clearly wide-ranging creative abilities and a fan of the film’s highly talented cast, I was excited even before seeing the teaser trailer.

Without any doubt, Nocturnal Animals is a film well done, especially in terms of the actors and all that they were able to convey ever so convincingly. The story is engaging and it certainly left me incredibly grateful for my circumstances and experiences to date. However, even though the synopsis for Nocturnal Animals explains that ‘a wealthy gallery owner is haunted by her ex-husband’s novel, a violent thriller she interprets as a symbolic revenge tale’, I still didn’t expect the nature of the very dark turn everything took quite early on in this movie.

Approximately fifteen minutes into Nocturnal Animals, I started to wonder if I was going to be able to continue watching further. Reason being, what was happening on screen was so intense, uncomfortable and scary, for anyone, but  especially from the point of view of a young female.

I enjoyed the cinematography and all the performances. I even found myself feeling particularly happy for Gyllenhaal because he got to play a character more vulnerable than any he’d ever played before. And since I’d become so used to seeing his characters mostly in control in his movies, seeing him with very little control made me want to stop watching and switch over to a movie where the people he played had more power. I.e. Nightcrawler (2014). I think this means 1) that I don’t enjoying watching suffering and 2) I may be too attached to my favourite actors and I mostly prefer to see them in roles where they get to win.

As a fan of his great work in Nowhere Boy (2009) especially, I’d also become comfortable with liking the characters played by Aaron Taylor-Johnson. Thanks to the Nocturnal Animals trailer, I knew that liking Taylor-Johnson’s character in Ford’s movie wasn’t going to happen, but my oh my did he play his role well.

In terms of the things I liked less about this movie, a part of me found the music and what looked like stills of the clouds / landscape a tad annoying. Also, some of the editing towards the end had me wishing that the story was told in a more traditional style, if only so I could follow things better. But my reaction to these seemingly little annoyances is nothing compared to how I felt immediately after the ending. ‘No! Mr Ford, No!’ I screamed as I slapped the wall to my right with frustration. ‘Are you really ending it there? I’m so mad at you for ending it there! Aaaaaaarrrrggg!!!’ Damn it, Tom! Nooooooooooooooo…! I continued for a good four minutes.

Maybe you won’t have reactions as strong as mine from beginning to end. But the best reasons for watching Nocturnal Animals include the brilliant performances and another presentation of Tom Ford’s enviable and inspiring creative gifts.

The latest trailer from super creative, Tom Ford has landed. Starring Amy Adams, Jake Gyllenhaal and Michael Shannon, Nocturnal Animals centres around an art gallery owner who’s haunted by her ex-husband’s violent thriller novel. One that she interprets as a veiled threat…

This one is a must watch because of Mr Ford and the rest of the brilliant film making team. I’m also equally excited and terrified to see what Aaron Taylor-Johnson does with his role

Lastly, what a year it’s proving to be for the lovely Amy Adams.