Kennedy’s life and career become derailed after his involvement in a fatal car accident that claims the life of young campaign strategist, Mary Jo Kopechne…

I’m intrigued because I want to see Jason Clarke in a leading role and Ed Helms  excel in a dramatic, non-comedic one.

Starring Kate Mara, Jennifer Jason Leigh, Paul Giamatti and Boyd Holbrook, Morgan is the story of an artificial being whose continued existence is to be decided by a corporate risk-management consultant…

I’m a fan of Alex Galand’s Ex Machina (2015) and as I watched the above trailer, it occurred to me that this movie may just be the closest that Ex Machina fans will ever get to a sequel. Not ideal but I’ll take it. 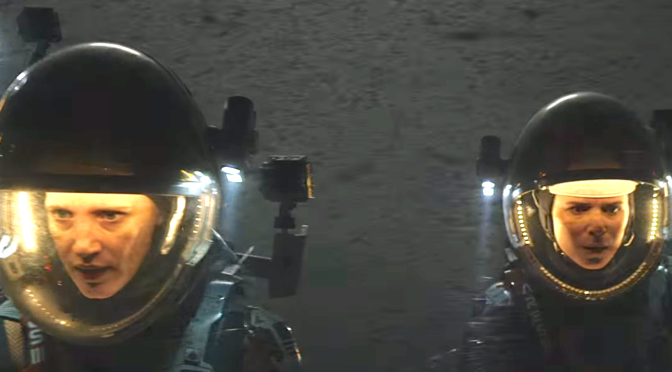 I myself would never want to typecast anybody against their will, but I did find myself  very glad to learn that in The Martian, Matt Damon gets to play the role of a hero once more. Having to ‘hate him’ in Interstellar (2014) proved more challenging than expected.

Directed by the rightfully celebrated Ridley Scott and based on Andy Weir’s best selling book of the same name, The Martian is a predominantly mars based adventure with a sprinkle of funny moments.

Like you might imagine, similar to Interstellar (2014), there’s a fair amount of ‘science speak’ in the film. Most of it I personally will probably never understand, but you don’t need to in order to have a good time. The movie works, thanks to the story and the likability of its star.

A few awards bodies placed The Martian in the comedy category. About that… there are a few funny quips here and there – and by ‘a few’ I don’t mean ‘a good few’ in the way that some people use the phrase to mean ‘a lot’. I do actually mean ‘a few,’ meaning no more than 5 laughs / giggles at most – which, in my mind doesn’t equal to a comedy.

The thing I enjoyed most about The Martian is all the scientific problem solving that Damon’s character, astronaut Mark Watney and the wider NASA team do in the effort to bring him home in one piece. I like the movie for this reason and as a story of teamwork and survival. I’ll also confess to getting quite a kick from seeing the female commander, played by Jessica Chastain take charge.

Science fans will likely enjoy this movie most, but everyone else will be pleased also, for the topic of surviving on mars is a relevant and interesting one at this time. With that said, watch it because it’s good. Another reason would be to find out for yourself whether categorising The Martian as a comedy is at all justified. I remain unconvinced.

How did I not feature the Fantastic Four trailer sooner? Slight super hero movie fatigue perhaps.

Whatever the answer, I’m doing it now because it is rather well done. My favourite moment being when Reed Richards/ Mr. Fantastic looks up and down to his right. Isn’t slow motion a beautiful thing?

With some of the most talented Actors of young Hollywood, Fantastic Four is an interesting super hero movie about, you guessed it, saving humanity. This new reboot is directed by Josh Trank and stars Miles Teller, Michael B Jordan, Kate Mara and Jamie Bell.

Read my spoiler-free movie review of The Martian (2015)

The new film from Ridley Scott, director of many hit films including Gladiator (2000) stars Matt Damon and looks amazing.

As excited as I undoubtedly am, something tells me I’m probably going to get my heart broken, and by that I don’t mean I’ll be disappointed but that something similar to the end of 1998’s Armageddon might happen.

I’d of course much rather be pleasantly surprised than have that particular theory come to fruition.

Then again, on the other hand, whatever it takes for the film to be great is what I really, really want.